The Thrill of a Twill!

Robyn Spady, an incredible weaver, teacher, and person was in town as the keynote speaker for the Iowa Federation Meeting hosted by yours truly-The Craft Guild of Iowa City. After which, she presented a 2 day workshop, The Thrill of a Twill for CGIC members, as well as others from Omaha, Waterloo, Norwalk. And a thrill it was. 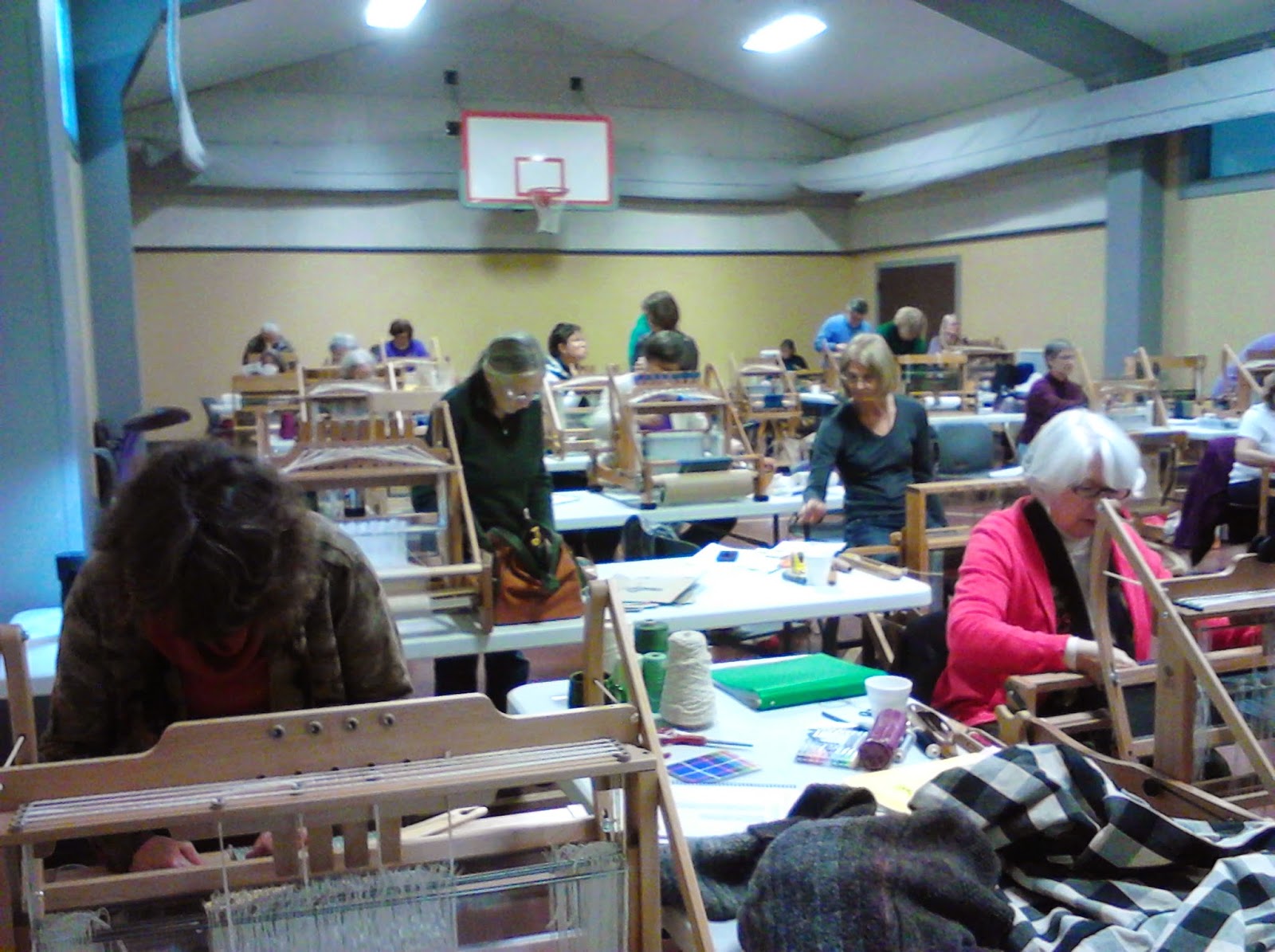 We meet in a gym in Shueyville; Robyn laughed that it was the first time she shared space with a basketball hoop. Each person chose his/her own fiber, warping her/his looms to weave each of the samples discussed by Robyn. In this photo, 30 folks are diligently working. After lunch the adventure continued, Robyn showed us how could we develop the twill into something magnificent on only 4 shafts. She demonstrated computer softwear use in designing twills. Over the next two days, we wove, experienced, socialized, shared meals, and thoroughly enjoyed learning the thrill of a twill and spending time with other weavers.

We spent a lot of time just looking at how others' samples were coming out.  Asking all those intelligent questions like... 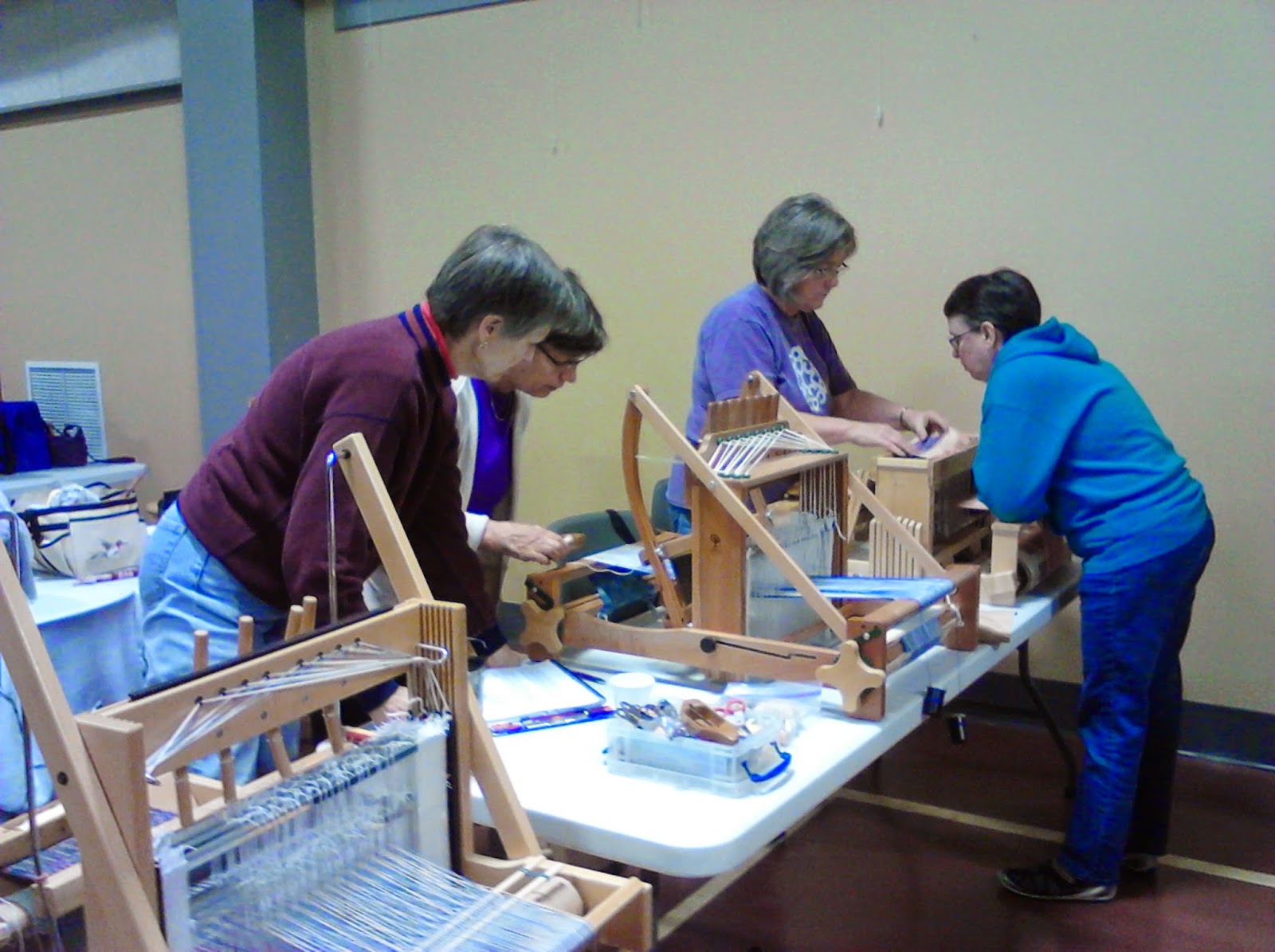 How did that squiggle  happen?


Laughter, Food, Fiber...A couple of days with other likeminded folks...it doesn't get any better than this.
Posted by craft guild of iowa city at 8:03 AM No comments:

In September, 1939, war was imminent, and a group of women got together to enjoy their friendships, their crafts and to recycle materials into usable items. It was during this first year, the guild direction was founded, a social network with a mission, the goal of repurposing whatever could be found as was needed at the time and educating women in "home arts". Some early example of their thrift were using copper from wiring for art and for jewelry, pewter for candle holders, wax for candles.

We continue the tradition and recently had an open house to welcome back from our summer hiatus returning and new members. It was such a treat to see all the items folks had been working on.  Guess it really wasn't  a hiatus.  We are no longer a group of just women, but men and women who are weavers, spinners, potters, quilters, beaders, ply-split braiders, and knitters. And yet, our mission has remained the same to encourage each other to pursue our creativity in whatever fashion moves us. All the while, provide educational opportunities, participate in service projects, and genuinely reach beyond our comfort zone. The Craft Guild of Iowa City is still going strong.

The weavers group challenged its members to design and weave something that would represent 75 years of weaving. The weaver group was one of the three original arts when the craft guild began.


Nancy wove a green towel the color of our logo and the bathroom she painted when the group moved into the house...and its still green. In the spirit of the founding members who repurposed everything they could in their works, Terry wove a towel in manifold twill using cotton recovered from recycled cotton, unraveled from materials from the Crowded Closet. The pillow was woven using a "barcode" that horizontally spells CGIC and vertically seventy-five. We also had a runner using a diamond twill because 75th anniversary is the diamond anniversary, a silk sari sparkling rug/runner, a bamboo double mat having 75 spots and red tencel scarf in a diamond pattern. 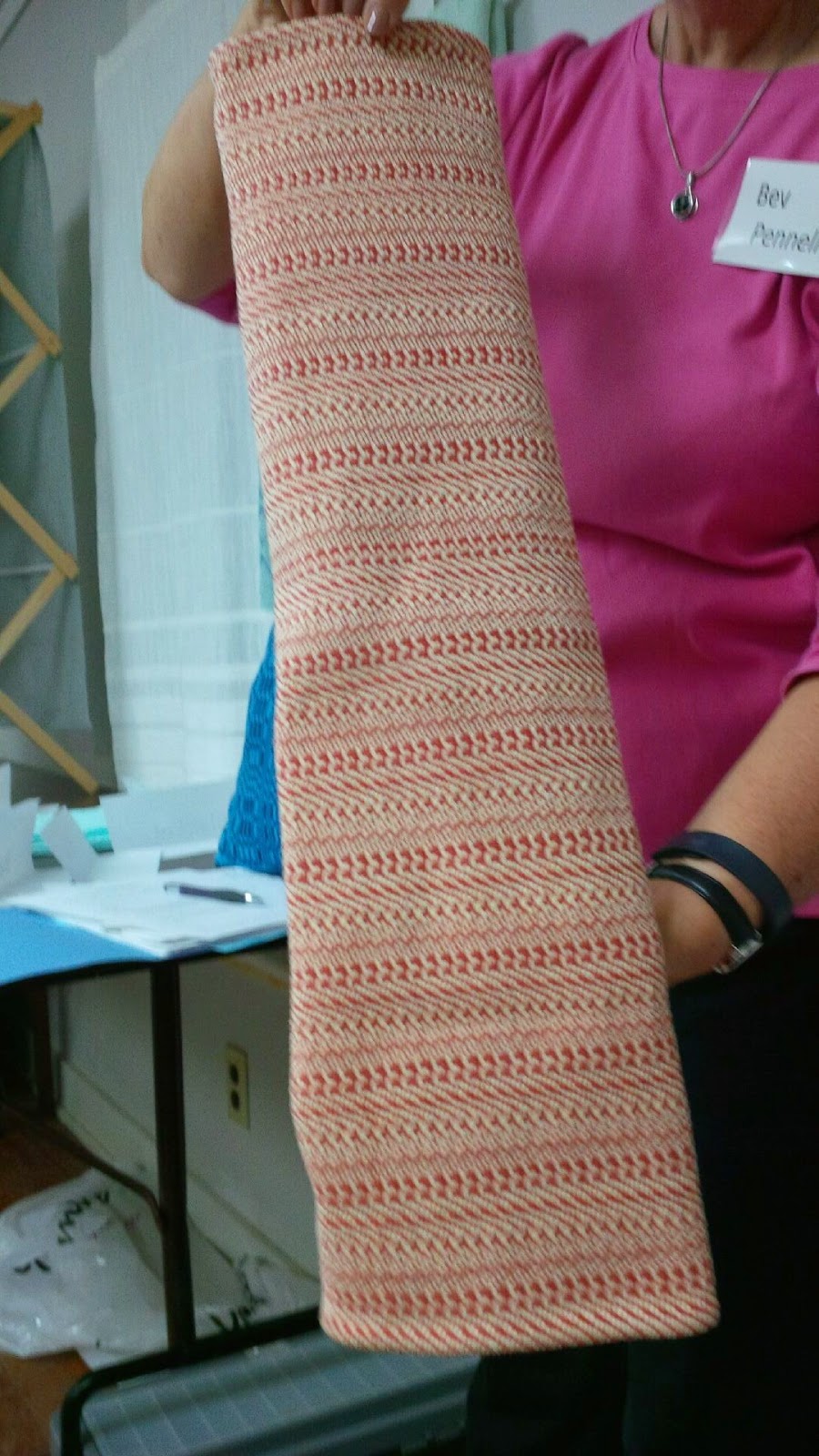 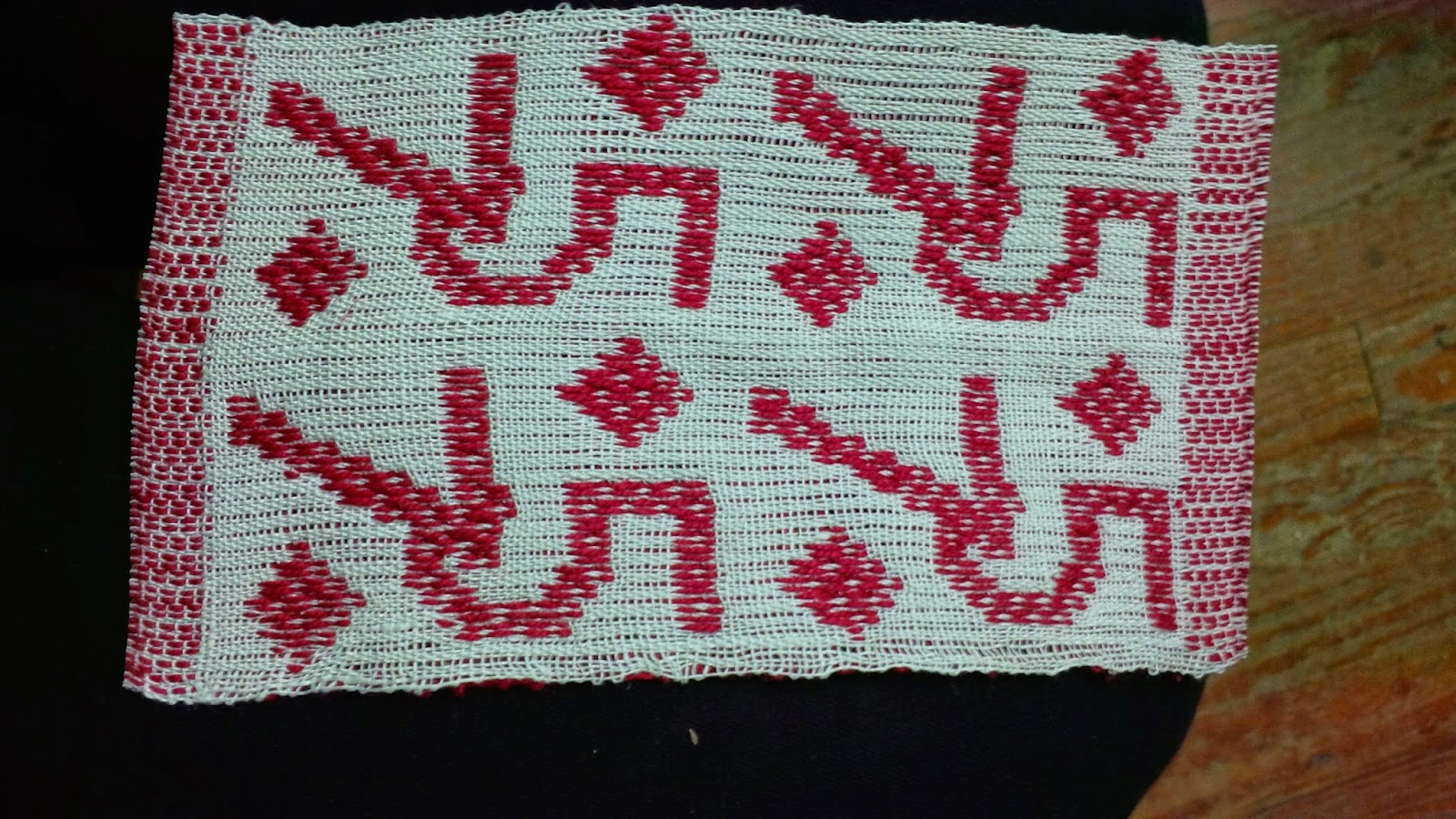 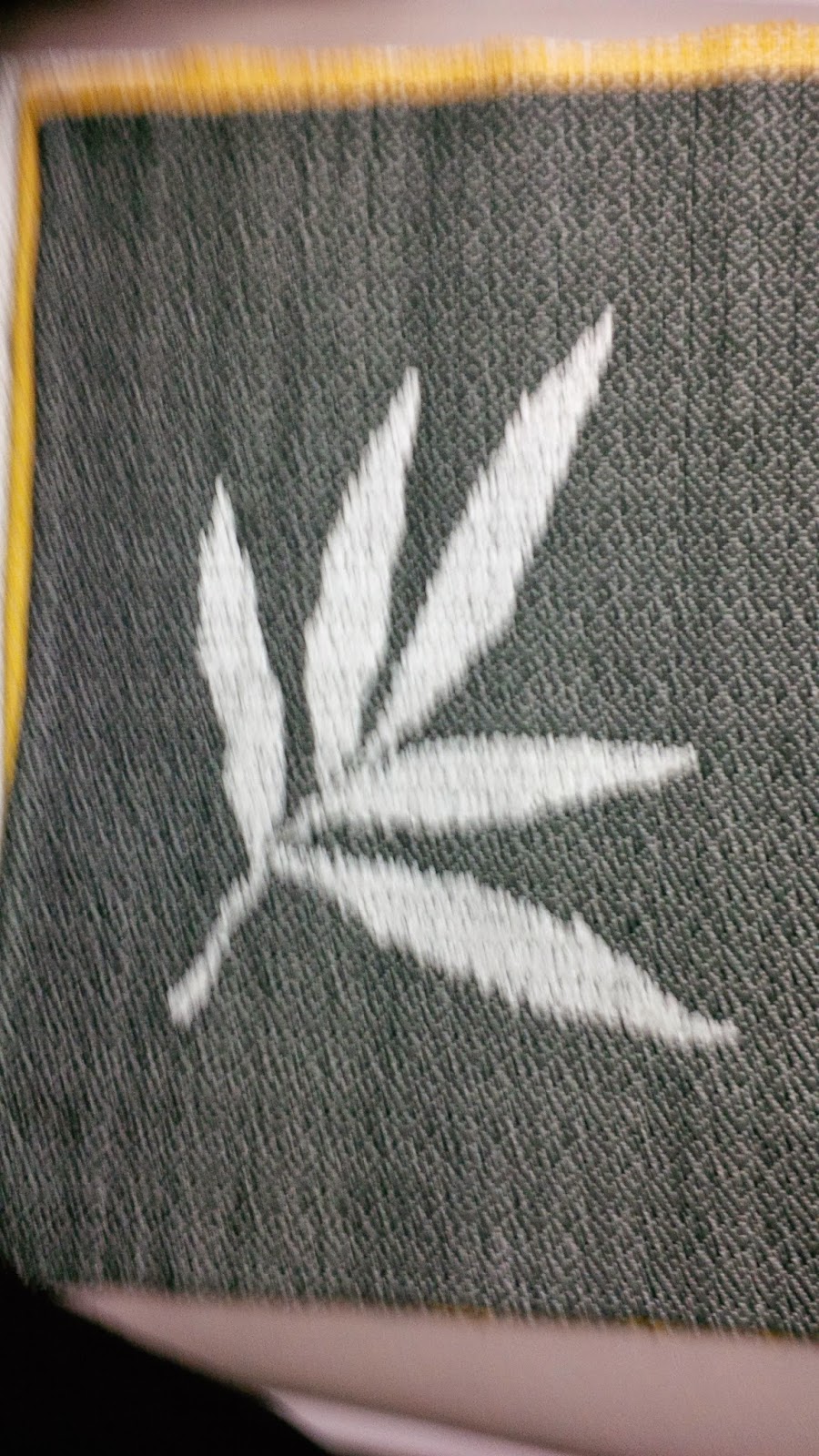 Mary used the structure 8 point broken diamond omitting the 7 and 5 to produce the background for the moorman inlay linen and bamboo napkin.

I know I have forgotten someone and for that I apologize. I was so impressed by everyone who took up the challenge and not only ran with it, but who embraced it.

This is clearly an example of why this group is still going strong after 75 years.
Posted by craft guild of iowa city at 2:21 PM No comments: