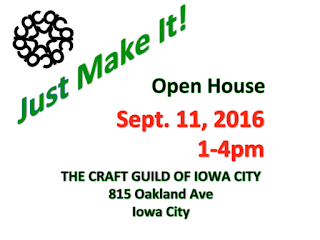 Come by and see all the work our members have been doing over the past year, renew your membership or simply to enjoy the cookies, comradery and members  demonstrating their various crafts
Posted by craft guild of iowa city at 9:35 AM No comments:

Historically, Independence Day reminds us with patriotic excitement, what challenges and struggles have been overcome in the last 200 years ago, a step back into time, a glimpse into the past. A glimpse into the past became most interesting to one of our guild members who came across a trunk that hadn't been open in at least 100 years.  The key had been lost and it had been passed down through the family, the inside of which ne'er to see the light of day.

And then...She says with a pregnant pause.  I will not be swayed, I will open this truck. We tried every key anyone had, we tried to jimmy the lock, and we even tried to pick the lock. But she did refuse to cut the lock off or cut the hinges. Long story short through perseverance, a emailed picture, a pencil tracing of the lock and all the numbers found anywhere on the truck, a locksmith was found in Pennsylvania who thought he had just the key.  AND HE DID. 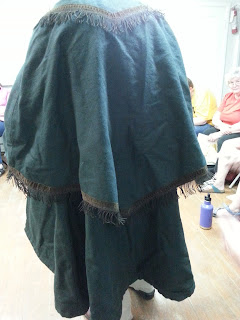 She had it open, a grand unveiling. Inside were vintage clothing, furs, and newspapers from the late 1800's.  Amazingly, the clothes were a little dusty perhaps, but largely in good condition.


The pi`ece de re`sistance was a coat which had a note in the pocket, dating it to approximately 200 years ago.   "This wrap is about 200 years old.  The material in the wrap was woven by Mrs. K........'s great grandmother." 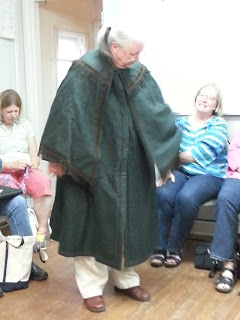 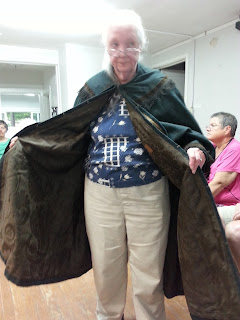 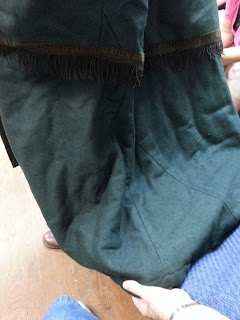 Always curious, she started to research its origins. 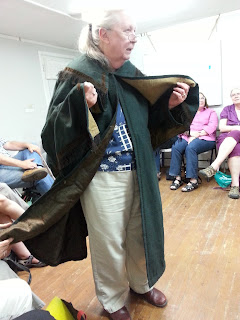 Usually, this items would have been passed down through the women in the family and it is believed to have come to this country in 1866 with Birgitte who was born in 1835 and would have been the weaver's granddaughter.  The weaver (Maren) was born in 1751 and had her first child in 1777 and the mother of Birgitte in 1790.  Googling Orum, Hjorring, Denmark history says the town was begun in the 1250s and was a trade center among other things. 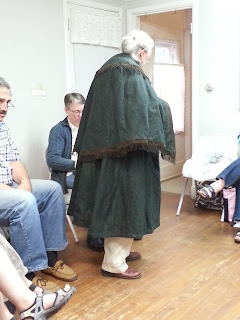 This suggests that it is possible some of the materials for the coat could have been purchased but also suggests that knowledge of weaving may have come in as well.  The coat lining appears to be silk, woven in a damask pattern.  One would first assume that it was purchased although could a draw loom have been used?  Also in the history, a report of fire in the 1820's may have destroyed relative information. She has also contact a fiber center in Denmark and is awaiting their reply.

There were other items in the trunk, a suit ensemble obviously designed for a pregnant women, a gentlemen's evening coat, a beaded cape, a fur coat (you could still feel the oils of the animal) and several other items. I must admit we were like little kids reveling in the "what could this have been?" and "how was this made?"

Anytime we step back into time whether it's through a holiday remembrance or a trunk in the attic, there is a story to tell, a time to research, a history to be learned.

Even as she cleaned the clothing (with careful archival instructions from her fabric designer granddaughter) and returned them to the trunk, the quest for the coat's history continues. Stay tuned, Denmark may just add more to the story.

Posted by craft guild of iowa city at 9:18 AM No comments: