The spinners had one day workshop on cotton blends with cotton spinning and weaving expert Joan Ruane. Joan has been teaching spinning for almost 30 years. As a graduate of Springfield College, she taught in the Tucson public schools before going to New Zealand in 1971. In New Zealand where there are 3 million people and 30 million sheep, she learned to spin from Ruth Reid. Returning to the U.S.a year later, she brought with her two fleeces, a pippy wheel and a flick carder. And so began the love of fiber.

Joan was the featured speaker at the Iowa Federation of Handweavers and Handspinners meeting, hosted by our Guild, at the Johnson County fairgrounds, Building C, on Saturday, April 14th.  Joan is an engaging and very knowledgeable speaker...whether you're a spinner or weaver, she was enjoyed by all. She spoke about cotton from boll to cloth in the morning and in the afternoon about the state of hemp in the United States.

The spinner had a one day workshop on cotton blends with cotton spinning and weaving expert Joan Ruane on April 15th. 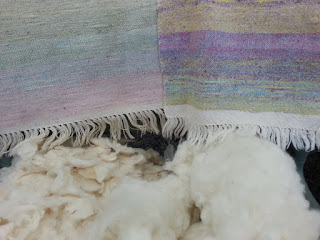 Cotton lint with two pieces of cloth that Joan spun, dyed and used as weft with commercial cotton warp 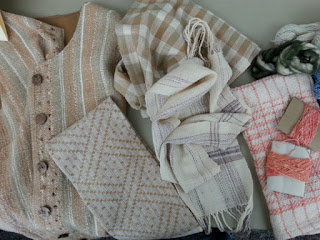 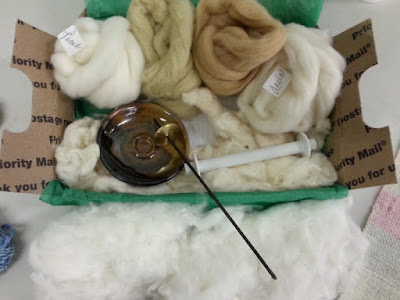 In the little open box is cotton fibers, with a Takii spindle and bowl for it.

So much to learn, so little time, so such fun. It was a fantastic weekend.
Posted by craft guild of iowa city at 1:34 PM