A Gift of Friendship

Turkey Day has come and gone...did I really have to eat a piece of every dessert?? Yeap, and they were soooooooooooooooo good. Well, now for a reality check, the holidays are upon us. Regardless of which holiday you celebrate, there are "so-called sales" everywhere, and you just have to buy this gizmo for this distant relative who probably doesn't need it and save all that money you really didn't have to spend in the first place. Gotta love consumerism.

But in the arts, gifts are truly from the heart. You think about the person, what you'd like to do for him/her, work many hours planning and completing something special...a part of yourself to share with an individual. Nothing is more incredible than a gift of mind, body and soul. With that in mind, I want to share a note I received from the weavers... 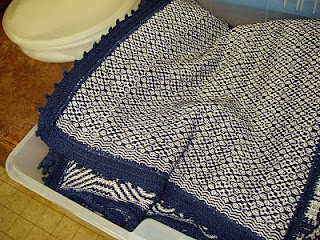 In 1983 and 1984 a group of weavers at the Craft Guild of Iowa City organized a Friendship Coverlet exchange. Each person chose a four harness overshot pattern and a pattern yarn color. Everyone wove a square in their pattern in each of the colors chosen by each participant, plus their own, resulting in everyone receiving a square in each pattern in their chosen color. Everyone completed their squares and went home with enough to make a coverlet. Over the years a few were assembled and completed though many are still just a pile of squares waiting for time and inspiration to converge.

One of the participants was a new weaver named Gretchen Grimm. She got a lot of help and encouragement to weave her squares and is still somewhat amazed that she really did them all. She never got around to assembling her coverlet though. In the early 2000s, her squares were among some things sent to an auction by family members. As luck would have it, they were retrieved by a friend and brought home again. In the fall of 2010 she decided to move from her rural home to an assisted living apartment in town. In the process of this move, with its many difficulties, the squares were once again nearly lost. They were taken to a second hand store by a family member. Gretchen called to see if they were there and a wonderful volunteer rescued them and delivered them to her apartment. At this point Gretchen sent them home with a friend for safekeeping. 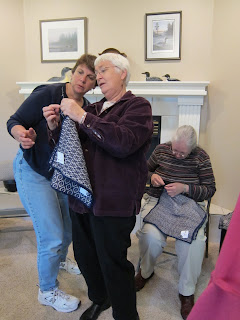 This friend conferred with others in the Craft Guild weavers group and told them of Gretchen's wish to have the coverlet squares crocheted together. A plan developed and the squares were washed and passed out to several members to machine zigzag stitch all around, trim off the headings and single crochet around each one. 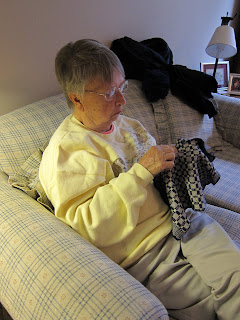 At one of the monthly daytime meetings they were arranged, labeled for location, and whip-stitched together. A couple of members took the pieces home to finish the assembly and add a simple decorative crochet border around the whole coverlet. 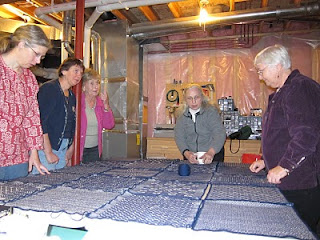 Just before Thanksgiving, Gretchen was persuaded to attend the weavers meeting, despite her painful knee, and she was very much surprised to receive her finished coverlet. 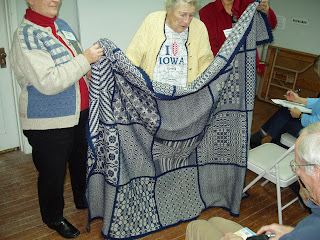 The Craft Guild has always been a special place for Gretchen and this gift is a wonderful example of how the Friendship Coverlet lived up to its name. 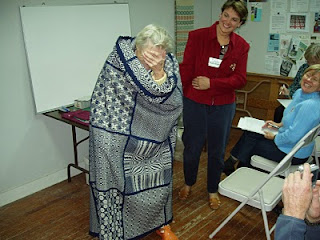 TRULY A GIFT OF MIND, BODY, AND SOUL-FRIENDSHIP!
Posted by craft guild of iowa city at 7:04 PM