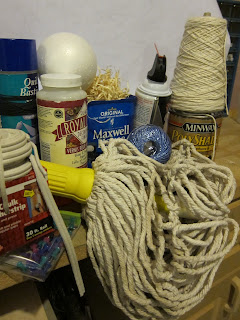 What do all these items have in common? They're Found Art. This is an expression I'd never heard nor seen before Diane Fleshin's program on Found Art. She began with defining or explaining the concept of creative tension and how to experience it rather than fear it. We all have IT. IT is the tension which develops between a creative idea and the time it needs to be accomplished; the impetus to get it done, coupled with the thrill of discovery and the ability to adapt whenever reality intrudes. Diane decided her process was think, truly think outside the box, set guidelines and RUN with it. Her guidelines were to use only items found around the house, or at the local farm store, weave using only warps currently in place on looms, and do projects that could be produced by Tuesday. And mind you, this from probably Friday, or so. She took many of the items, such as you see above, and let her artistic juices fly. I'm not sure taking apart a string mop head, strand by strand, would encourage my visions of anything but a noose-- not so for Diane.

Her results were not all blue-ribbon worthy; many were outstanding and a couple really impressed me. Two of my favorites were silly string weaving and dinosaur weaving. Diane took silly string. Yes, she played with it first. Collected the strings, wove them, shellacked and mounted on velvet...Amazing piece. A dinosaur woven wall hanging began as a mural on Sam's wall. After it was removed, it was cut into strips, numbered and woven...another wow, incredible. This was such an enlightening program, bottom line...set yourself free, express yourself, experience and experiment whatever and whenever. Have Fun. You may have some disasters, but you may also have some magnificent art. Excellent program!
Posted by craft guild of iowa city at 8:46 PM